In our previous articles we’ve explained how to apply threadlockers and also how to choose the right one. In this article we’ll talk a bit more about the real life scenarios where threadlockers can be used.

Locking and sealing nuts and bolts with Threadlockers is a common procedure in automotive repair, but threadlocker technology can support a wide range of other applications as well. Threadlockers are used in a variety of applications, from automobiles and bikes to watches and eyeglasses. 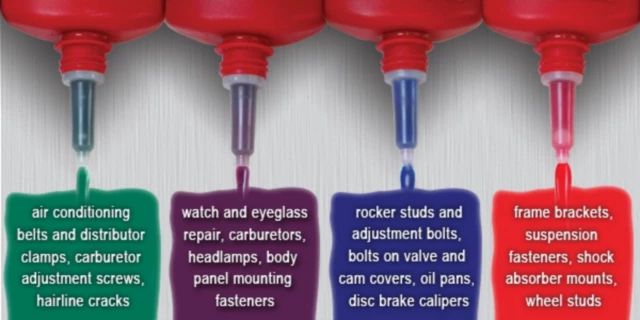 Even if the fasteners on your eyeglasses start to detach, or you need to fix your laptop computer, Loctite 222 is a threadlocker that specialises in these small fastener assemblies, usually less than 6mm. The main advantages of this threadlocker are that it is easy to apply to small fasteners, that it locks and seals out moisture, and that it can be gently removed using the same hand tool that was used to assemble the fasteners.

On fragile assemblies, smaller fasteners are often used. This threadlocker gives you the option of still reliably holding your assembly together, but if you ever need to remove them, it won’t require a huge amount of torque that could potentially damage your assembly.

The most important tool in your toolbox is Loctite 243 Medium Strength Threadlocker. It has a higher melting point than Loctite 222 but can still be extracted with normal hand tools.

There are countless applications for Loctite 243 Medium Strength Blue Removable Threadlocker! Anything around the house with screwed assemblies, such as door handles, lawnmower nuts and bolts, cycle brake fittings that loosen due to vibration, wind, repeated use, and so on, is a common item. Check around the house for these things and add some Loctite 243 Blue Threadlocker to keep it tight and stable. 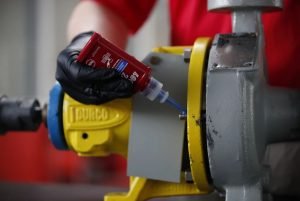 When repairing engines or other equipment with studs, a strong threadlocker is needed to keep the studs in place when removing nuts locked onto the studs with Loctite 243 Threadlocker. Green threadlocker is better used in areas of high vibration or where the fastener does not need to be removed.

Our lawn and garden equipment is generally subjected to a great deal of neglect, especially during the winter months. High Strength Green Threadlocker is ideal for certain critical areas, such as the bolts that secure a lawn mower’s engine to the ground.

In these cases, a product such as Loctite 270 High Strength Threadlocker is ideal. Simply add Loctite 270 to the nut and bolt, reassemble, and it will not only protect the fasteners from corrosion, but it will also lock them in place to help withstand shock, vibration, and temperature variation.

If you have an assembly that has already been put together but the fasteners have not been threadlocked, the Loctite 290 is the solution. Loctite 290 Wicking Grade Threadlocker is specifically built for circumstances where fasteners are already in place and torqued down, however you want to increase reliability.

Apply a few drops of threadlocker with the tip of the threadlocker bottle at the interface of the nut and bolt (or bolt and blind hole). The product has the ability to wick between thread engagements, completely cure within 24 hours, and then lock and seal for the life of your assembly without the need to disassemble the fasteners during application. This product can be used on a variety of applications, including bicycles, instrumentation screws, and carburettors.